Kernersville, N.C. (January 20, 2016) – Matt Kaulig is proud to announce the establishment of full-time NASCAR XFINITY Series (NXS) team, Kaulig Racing™, for the 2016 season. With a familiar face behind the wheel, Blake Koch has been selected to pilot the No. 11 LeafFilter Gutter Protection™ Chevrolet Camaro for the 2016 NXS season.

“I am extremely excited to finally announce the formation of Kaulig Racing™,” said Kaulig. “This is an exciting project and venture that we’ve been working on for months, and it’s great to finally introduce our team. I have a vision of how I want to build this team and the pieces are coming together quickly.”

Kaulig is the President and owner of LeafFilter Gutter Protection™, an Ohio-based leader in the gutter protection industry, and has sponsored Blake Koch in both the Sprint Cup and NXS the last 2 years.

Entering into NASCAR initially in 2014 in a sponsorship role with Koch, Kaulig is ready to start a new endeavor and transition to team owner. Setting the team up for success early on, Kaulig Racing™ has joined forces with powerhouse team Richard Childress Racing (RCR), in a technical alliance. RCR collaboration with the technical partnership brings an extra boost of confidence to the Kaulig Racing™ team for the 2016 season.

”We are pleased to collaborate with Kaulig Racing™ as they establish themselves within the highly competitive NASCAR XFINITY Series,” said Mike Dillon, vice president of competition for Richard Childress Racing. “Blake has a tremendous amount of talent behind the wheel of a race car and we wish him, Matt, and everyone associated with Kaulig Racing™ success as they establish their identity and enter the 2016 season.”

Familiar with the RCR name, Koch was recruited as a developmental driver for the team in 2009 during his K&N Pro Series West rookie season. Moving up the ranks from there, Koch entered into NXS full-time in 2011. Since then, the 30-year-old driver has collected 147 starts in the NXS, and has his sights set on a successful 2016 season with newly formed Kaulig Racing™.

“I can’t even put into words how excited I am for this opportunity,” said Koch. “Watching it all come together is something very special, and Chris Rice has done an amazing job assembling this team. Matt (Kaulig) and LeafFilter Gutter Protection™ have given us everything we need to be competitive. Because of Matt’s great leadership and employees, LeafFilter™ has grown to be an industry-leading company that has made this opportunity possible. I am beyond proud to be able to represent them on and off the track.”

Koch’s 2016 NXS season will be led by General Manager of Kaulig Racing™, and veteran crew chief Chris Rice. With experience in all three of NASCAR’s national series, Rice has amassed 220 NXS starts to his resume, including one NXS start with Koch during the 2013 Championship weekend at Homestead-Miami Speedway in Homestead, Fla. Starting on the outside of the front row, Rice led Koch to an 11th-place finish, a career-best start and finish for the West Palm Beach, Fla. native in the NXS. That race jumpstarted Koch and Rice’s relationship, and ultimately led to the creation of Kaulig Racing™.

The 2016 NASCAR XFINITY Series season kicks off on Saturday, February 20 with the Powershares QQQ 300 at Daytona International Speedway in Daytona Beach, Fla. 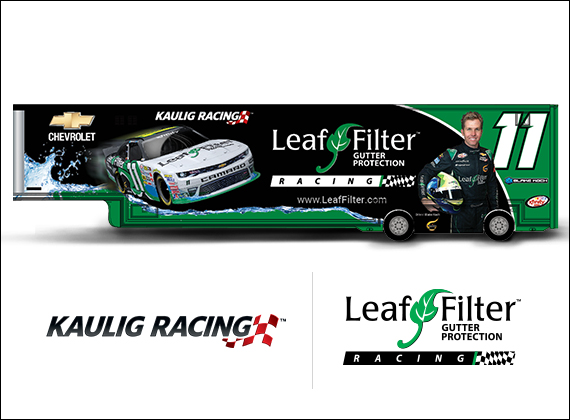 Since 2005, LeafFilter™ has revolutionized the gutter protection industry. The company is proud to have grown from one small office in Hudson, Ohio to 28 offices nationwide that serves 33 states. It has become a leading choice in gutter systems for homeowners over the past ten years. LeafFilter™ is a micro mesh gutter guard that attaches to your existing gutters and provides you with clog free gutters for the life of your home. The micro-mesh filter is 50 microns fine – so not even sand can get through. With more than 25 million feet of gutter guards installed on homes across America, LeafFilter™ has the knowledge and expertise to guarantee that nothing but water will get into your gutters. To learn more about LeafFilter™, visit: LeafFilter.com. 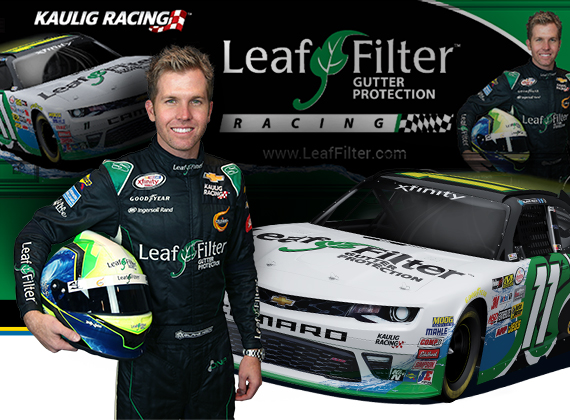