David Starr qualified 22nd for the Kansas Lottery 300, followed by Cale Conley in 24th, Blake Koch in 25th and Eric McClure in 31st.

David Starr Finishes 22nd in the Kansas Lottery 300
After sustaining right side and splitter damage during the first NASCAR XFINITY Series practice session on Friday, the No. 44 team displayed an exemplary collaborative effort in repairing the Zachry Camry. Driver David Starr rallied to qualify 22nd for the Kansas Lottery 300. With a caution on lap one of the 200 lap race, Starr reported the Zachry Camry was handling well and was just a little free into turn three. By lap 44, scored in 25th, the handling of the Toyota had become a little “twitchy”. Crew Chief, Matt Lucas, had Starr pit under caution for four tires, a track bar adjustment and fuel. Starr returned to the field in the 22nd position. As the race progressed, Starr fluctuated between 23rd to 25th place. Being a lap down, a much needed caution on lap 115, made Starr the recipient of the Lucky Dog and he was posted back on the lead lap in the 21st position. Through a series of additional cautions, Crew Chief Matt Lucas continued to make track bar and air pressure adjustments, which resulted in Starr reporting the car was “good” advancing to 18th position on lap 158. As a result of a late in the race caution, the Kansas Lottery 300 concluded under a green, white, checkered with Starr finishing 22nd.

Blake Koch Finishes 25th in the Kansas Lottery 300
Blake Koch qualified 25th for the Kansas Lottery 300 at Kansas Motor Speedway. On lap two, Koch reported that his LeafFilter Gutter Protection Camry was loose. 30 laps later, Koch reported that his Camry was loose on entry and exit. The team came to pit on lap 48 for four tires, fuel and adjustments. On lap 51, Koch was scored in the 28th position and reported that the adjustments helped the drivability of his Camry, but he needed more of that adjustment. The team came to pit road under caution for a track bar adjustment, Sunoco Racing fuel and a windshield tear off. When the caution flag waved at lap 130, Koch came to pit road for fuel only. With less than 50 laps to go, Koch reported to Crew Chief Nick Hutchins that his Camry was finally coming to him. With 18 laps to go, Koch was running in the 25th position and would maintain that position at the end of the race.

Driver QUOTE: “I’m really proud of my teams effort. We didn’t have the best car, but my guys worked hard and made it better as we ran. We were able to gain some points and as the season winds down that’s always a positive note for our team.”

Cale Conley Finishes 30th in the Kansas Lottery 300
Cale Conley and the No. 14 IAVA team had a frustrating weekend at Kansas Speedway. The Kansas Lottery 300 marked Conley’s first race at the Kansas City track, but unfortunately the team was plagued with mishaps. Saturday morning, Conley advanced through to the second round of XFINITY Series qualifying. The team discovered a hole in the radiator in between rounds, preventing Conley from returning to the track for another qualifying attempt and forcing him to start the 200-lap event from the 24th position. Conley wasted no time breaking into the Top 20 by Lap 7. He reported his Toyota Camry was handling well and he maintained position throughout the early laps of the race. What Conley believed to be a cut right front tire caused him to make contact with the outside wall on Lap 80. Upon closer inspection, the wheel had come apart, breaking the welds and splitting the centerpiece from the rest of it. He pit for repairs and returned to the track in the 23rd position. Unfortunately, a body rub cut the right front tire, sending the rookie once again into the outside wall and causing terminal damage to the IAVA Camry. Conley finished in the 30th position.

Driver QUOTE: “Another frustrating day. We broke a wheel early and then cut a tire due to body damage. It’s just unpreventable bad luck. The guys worked long hours this week getting this car ready and I hate it for them because deserve a lot better than the results we’ve been getting. Hopefully our luck turns around in these final three races and that we keep in mind that we’re lucky to be here.” 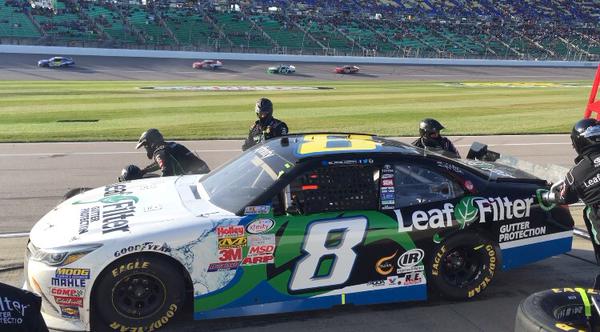