DAYTONA BEACH, Fla. (February 26, 2017) – Kaulig Racing driver Blake Koch picked up a 15th-place finish in the NASCAR XFINITY Series (NXS) season opener at Daytona International Speedway (DIS) on Saturday evening after surviving multiple on-track incidents. Koch’s battered No. 11 LeafFilter Gutter Protection Chevrolet Camaro looked much like it had endured a race at a short track at the end of the 124-lap event, but carried him through to the finish line in a race that saw 10 caution flags.

“I can’t say enough about how hard my Kaulig Racing team worked today,” said Koch. “We never gave up or let ourselves get discouraged despite having to make something close to 12 pit stops during the course of the race. We feel really good about the points we earned today and can’t wait to carry that momentum and drive into Atlanta next weekend.”

Koch started off the weekend with two practice sessions on Friday afternoon, averaging speeds in the top-10 in first practice and top-16 during single-car runs in second practice. Koch carried that speed over into qualifying on Saturday morning, earning an eighth-place starting position for the No. 11 team.

Koch settled into the 16th-position after the green flag dropped on the first 30-lap stage of the race. Before the field could complete three laps, the race was slowed by a quick caution flag, putting Koch in the same position for the restart on Lap 8.

He reported his No. 11 machine was loose on Lap 16, just before the caution was displayed again a lap later. Crew chief Chris Rice brought Koch down pit road under the caution on Lap 19 for four fresh tires, fuel and a track bar adjustment. Koch restarted 19th on Lap 22.

A lap after the restart, the first big wreck of the day transpired in front of Koch. He was able to avoid damage by maneuvering through the infield grass, leaving grass stuck in the grille of the car. The race was eventually put under a red flag, but Koch was able to come into the pits when it was lifted on Lap 25. The team removed the grass for the grille and topped off with fuel before restarting 18th with three laps remaining the first stage.

With just two laps to go in the first 30-lap stage, another big incident occurred again bringing the race under a red flag. With the field stopped before Turn 4, the stage would not end until the field crossed the start/finish line. The No. 11 car had suffered damage to the right-front nose area, which the team made a plan to fix while they waited out the red flag. When the race returned to caution, Koch crossed the finish line fifth to complete Stage 1, adding six championship points to his record.

In the break in between stages, Koch came down pit road for damage repair on Lap 31 and then again on Lap 32 for a routine, four-tire stop. He restarted in the 20th position in Stage 2 before a caution for debris came out on Lap 38. The team stayed out under the caution to restart 14th on Lap 42.

By Lap 50, Koch had advanced to the eighth position and was up to fourth with four laps remaining in Stage 2. With one lap remaining in the stage, Koch was involved in an incident, causing heavy damage to the left-front of the No. 11 Camaro. Fortunately, Koch was able to maintain speed and crossed the finish line at the end of Stage 2 in the 10th position, again adding to his championship points total.After the end of Stage 2, Koch came in the pits for damage repair on Laps 62 and 63 to fix the splitter and remove sheet metal from the wheel well. Koch started the final stage on the race from the 21st position on Lap 65.

One lap after the restart, Koch’s left-front tire shredded, bringing out the caution and sending Koch down pit road for the eighth stop of the race. The team secured the hood, worked on the splitter and changed tires during pit stops on Laps 79 and 80. Koch restarted in the 20th position on Lap 81.

The race saw a green-flag run from Lap 81 until the caution was displayed with under 20 laps remaining in the event. Koch avoided additional damage but reported he had flat-spotted his tires avoiding the incident. Rice brought Koch down pit road under caution on Lap 105 for the team’s 10th stop of the day to change tires and again on Lap 106 to secure tape that had been applied to the front-end of the No. 11 Camaro. Koch restarted 11th with seven laps remaining in the event.

With five laps to go, Koch reported he had lost all front-turn in the car. The caution was displayed soon after and he came down pit road to finish repairs. Koch restarted the race 16th for the green-white-checker finish, ultimately crossing the finish line 15th.

Koch and the No. 11 team leave DIS ninth in the NXS championship standings. The team returns to racing action Saturday, March 4th, 2017 at Atlanta Motor Speedway.

About LeafFilter®
Since 2005, LeafFilter® has revolutionized the gutter protection industry. The company is proud to have grown from one small office in Hudson, Ohio to one of the largest home improvement companies in the nation and a leading choice in gutter systems. Once installed on a homeowner’s existing gutters, LeafFilter®  Gutter Protection eliminates gutter cleaning for life. The micro-mesh filter is 50 microns fine – so not even sand can get through. With more than 30 million feet of gutter guards installed on homes across America, LeafFilter® has the knowledge and expertise to guarantee that nothing but water will get into your gutters. To learn more about LeafFilter®, visit:  LeafFilter.com .About Kaulig Racing™
Kaulig Racing™ is a full-time NASCAR Xfinity Series team, owned by president and owner of LeafFilter Gutter Protection®, Matt Kaulig. Blake Koch, driver of the No. 11 Kaulig Racing™ entry, has more than 180 starts in the NASCAR XFINITY Series. Kaulig Racing™ currently has partnerships with some of America’s leading companies across a wide range of industries such as LeafFilter Gutter Protection®, Celsius, Salt Life and AQUAhydrate. To learn more about the team, visit KauligRacing.com. 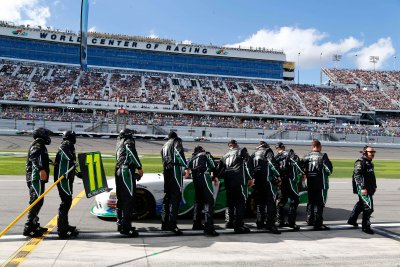