INDIANAPOLIS, Ind. (July 22, 2017) – After starting 22nd and sustaining damage early in the Lilly Diabetes 250, Kaulig Racing driver Blake Koch rebounded to finish 17th in the 100-lap event at the famed 2.5-mile Indianapolis Motor Speedway (IMS). The team ran as high as 11th after damage on Lap 48 affected the steering and overall front handling of the No. 11 LeafFilter Gutter Protection Chevy.

“Today could have ended much worse than it did and for that I am very thankful,” said Koch. “I hate that we were put in the position to suffer damage early, but am so proud of how we handled the repairs and never gave up. We were headed for a top-10 finish at the end there, but the right-front handling just continued to deteriorate so bad in the last laps.  I’m really eager to get on track at Iowa next weekend and fight for a top-10 finish at one of my favorite tracks.”

Koch, who participated in a NASCAR-sanctioned test at IMS last year, felt confident heading into Friday’s practice sessions with the new race package.  The West Palm Beach, Fla. native finished 17th and 11th, respectively, in the two practice sessions and told the team that the track and changes to the cars felt much different than they did during last year’s test. The changes, which included a larger spoiler, restrictor plates on the engines and air ducts in the nose of the car, left many unknowns for the entire garage.

“I think overall this new package really produced some great racing and presented everyone with challenges they weren’t expecting,” said Koch. “I applaud NASCAR for making changes to make the racing better and hope the fans feel the same way I do about how today played out.”

After firing off from the 22nd position on Saturday afternoon, Koch quickly gained ground and was scored 18th by Lap 10 of the event. He reported to crew chief Chris Rice that he was a little tight. He came down pit road for adjustments under NASCAR’s competition caution on Lap 15 for four fresh tires, fuel, track bar and air pressure adjustments. Koch restarted 18th on Lap 20, with 10 laps remaining in Stage 1.

Just two laps after the restart, Koch had made his way up to the 11th position, but lost drafting help by the time Stage 1 ended on Lap 30. He finished the stage in the 15th position, but told Rice that the previous changes had helped the handling of his No. 11 LeafFilter Gutter Protection Chevy. During the caution period, the team pitted for fresh tires, fuel and an air pressure adjustment. The team’s quick work on pit road allowed Koch to restart 13th on Lap 35 to begin Stage 2.

Just three laps after the restart, Koch sustained right-front damage after another driver spun in front of him. The team brought Koch down pit road on Lap 40 to assess the damage, lifting the hood to study the drive shaft. The team made subsequent stops on Laps 41 and 42 to continue damage repair and fill the car with fuel.

Despite making several trips down pit road, Koch remained on the lead lap and restarted 31st on Lap 44. By the next caution flag on Lap 48, Koch had raced his way up to 23rd and said he had lost some downforce but was able to keep battling back. The team pitted on Lap 50 to clean the grille of the car and make a wedge adjustment, putting Koch 27th for the restart on Lap 52.

With two laps to go in Stage 2, the caution flag flew as Koch ran 12th and had his eyes on the top 10. Unfortunately, the stage ended under caution with Koch in the 11th position. The team took the opportunity to come down pit road under caution on Lap 61 for fresh tires and fuel. After removing the right-front wheel, the team found it had been bent and may have been contributing to Koch’s handling issues. He restarted 16th on Lap 63 to begin the final stage of the event.

Koch raced his way up to 14th by Lap 65 and continued to gain ground, running 13th with 10 laps to go. In the closing laps of the event, Koch reported that the damage to the right-front had really affected the handling of the No. 11 Camaro. Even with severe cosmetic and mechanical damage to the car, Koch persevered to cross the finish line 17th at IMS in his fourth career start at the track. 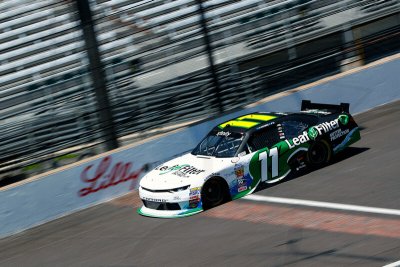