“We had a great points day at Bristol after fighting the handling of the car throughout the race,” said Koch. “We were really happy with the car in practice on Thursday, but the track conditions on Friday night were much different and didn’t do us any favors. I’m proud that we earned a track-best start and we will just keep digging to the playoffs.”

The team finished third and 11th, respectively, in Thursday’s two practice session. Koch focused on race runs and felt confident about the handling of the No. 11 LeafFilter Gutter Protection Chevy. As qualifying approached on Friday afternoon, rain showers took over the track, delaying the session and ultimately shortening it to one 20-minute round. With little opportunity to make a clean lap as all drivers fought for minimal track time, Koch made two runs in the session, slotting in 13th, a track-best.

The green flag dropped for the 300-lap race with sunny skies surrounding the speedway. The first half of Stage 1 was mired by cautions on Lap 12, 24 and 39. Koch was quiet on the radio and maintained the 13th position by the final restart on Lap 43. Stage 1 remained green until its completion on Lap 85. Koch finished the stage 18th and reported to the team that he was having trouble carrying speed through the corners. Crew chief Chris Rice brought him down pit road under the caution period for four fresh tires, fuel and an air pressure adjustment. Koch restarted 28th on Lap 94 to begin Stage 2.

The race remained green until Lap 123. At that time, Koch had raced his way up to 13thand reported to the team that the car was alternating between being too tight and then being too free. With the handling noted, the team stayed out under caution and restarted 13th on Lap 129. Koch was able to maintain the 13th position to the end of the stage, which completed on Lap 170. Under the caution, Koch visited pit road for fresh tires, fuel and a wedge adjustment. He restarted 14th on Lap 177 to begin the final stage of the event.

Stage 3 remained green until Lap 215, which gave the team a chance to bring Koch back down pit road from the 14th position. The call was for fresh tires, fuel and an air pressure adjustment, which allowed Koch to restart 14th on Lap 223.

Koch gained two positions on the restart before settling into the 15th position with 50 laps remaining in the race. The final caution of the day came with 14 laps to go as Koch ran 14th. The team did not pit and restarted 14th with eight laps remaining at Bristol. 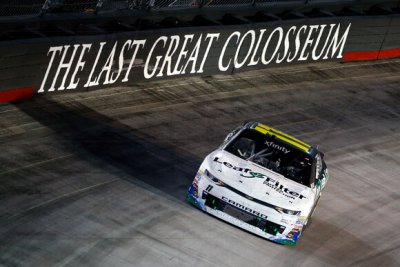