www.leaffilter.com
Blake Koch at Las Vegas Motor Speedway… Blake Koch has five previous starts in the NASCAR XFINITY Series (NXS) at Las Vegas Motor Speedway (LVMS). His best finish at LVMS of 18th came in 2012 after starting 32nd. In this race last year, Koch started the race 17th, but encountered a fuel-pressure issue during a pit stop, causing him to lose ground and eventually finish 26th.

Sounding Off- Blake Koch… “We learned a lot about our new downforce package at Atlanta last week that will translate to Vegas this weekend. We made a lot of adjustments to our Vegas car after getting a feel for our Atlanta setup, so I think we will be much better off when we unload on Friday. After a tough weekend at Atlanta, I’m just excited to get back in the car and look forward to a better weekend.”

2017 Season… Koch is currently 19th in the NXS Championship standings after a rough weekend at Atlanta Motor Speedway. Koch was involved in a Lap-2 incident, which crushed the radiator of the No. 11 LeafFilter Gutter Protection Camaro, relegating Koch to a 40th-place finish.

Experience on the Box… Veteran Crew Chief and Kaulig Racing General Manager Chris Rice has served as crew chief during 10 previous NXS races at LVMS. He has recorded two top-10 finishes in the NXS and an additional top-15 in a NASCAR Camping World Truck Series event at the track.

On the Car… Koch will carry the traditional LeafFilter Gutter Protection livery at LVMS with the addition of associate sponsor, Lifting Gear Hire. Lifting Gear Hire is the single largest organization in North America devoted exclusively to the provision of lifting and moving equipment for rent.

Tune-In… The NXS Boyd Gaming 300 from LVMS will be televised live Saturday, March 11th, 2017 at 4 p.m. ET on FS1 and will be broadcasted live on the Performance Racing Network (PRN) and SiriusXM NASCAR Radio channel 90. 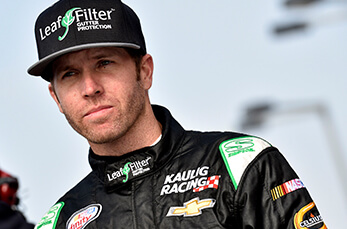