www.leaffilter.com
AVONDALE, Ariz. (March 19, 2017) – Kaulig Racing driver Blake Koch and the No. 11 LeafFilter Gutter Protection team finished 13th at Phoenix Raceway on Saturday after starting fourth and running inside the top 10 for the majority of the day. Koch, who was mired back in traffic after a late-race incident, gained 10 positions in the closing four laps of the NASCAR XFINITY Series (NXS) DC Solar 200.

“This team just never lets adversity get us down,” said Koch. “We fought back after getting run up the racetrack, getting taken out in Turns 1 and 2 and receiving a pit-road penalty. I wouldn’t want any other group of people on this No. 11 LeafFilter Gutter Protection team. We will continue to aim for consistency and have our sights set on the playoffs.”

Koch and the No. 11 LeafFilter Gutter Protection team had three solid practice sessions on Friday, averaging top-10 lap times in two of the three sessions. The speed carried over into Saturday morning’s qualifying session as Koch earned a fourth-place starting position, tying his best-career start at the track.

After the drop of the green flag on the first 60-lap stage, Koch fired off on the outside of the second row. He settled into the sixth position by the first caution of the race on Lap 12. At that time, he reported to crew chief Chris Rice that the car was a little free on entry, but overall well-handling.

Koch raced his way up to the fifth position after the impending restart and maintained that position until the car became too tight on exit of the turns. At the end of Stage 1, Koch was scored 10th and received one championship point for his top-10 stage finish.

Under the caution at the end of the first stage, Rice brought Koch down pit road on Lap 64 for four tires, fuel and a track bar adjustment. Koch took the green flag from the 11th position on Lap 70 to signal the start of Stage 2.

Because of Koch’s head’s-up driving, he was able to avoid an incident in front of him on Lap 84. He restarted ninth on the next restart and maintained a top-10 position to finish 10th at the end of Stage 2, again securing one additional championship point.

Under the caution, the team pitted for four tires, fuel, wedge and air pressure adjustments. Koch restarted 10th at the beginning of the final stage on Lap 129. The result of side-by-side racing left Koch pushed up the track and in the 13th position by the Lap 132 caution period. The team decided to stay out under that caution.

Koch maintained the 13th position until the next caution flag on Lap 156. The team pitted for four tires, fuel, and air pressure adjustment and a track bar adjustment before restarting 20th on Lap 163.  Koch had raced his way up the 16th when the caution flew just four laps later. He told Rice that the last adjustment had helped.

Following the restart, Koch was gaining ground until contact with a competitor sent Koch for a spin down the Phoenix Raceway banking. Fortunately, Koch did not damage his car and was able to come to pit road for fresh tires. A pit-road penalty sent Koch to the rear of the field for the Lap 188 restart, but his attitude remained positive.

With 10 laps remaining, the race was slowed by caution and an eventual red flag. Koch had raced his way up to the 23rd position and would restart there with four laps remaining in the event. In those final four laps, Koch gave it his all to gain 10 positions and cross the finish line 13th. 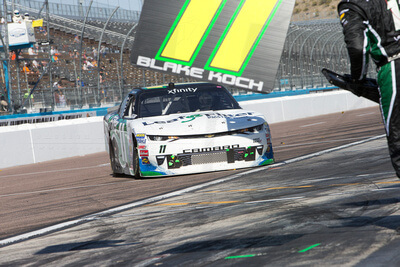