“I just couldn’t put the car where I wanted it on the track today,” said Koch. “We were good in clean air, but were so loose in traffic I couldn’t hold my line. We had good speed, but unfortunately couldn’t put it all together. I’m proud of our No. 11 LeafFilter Gutter Protection team and look forward to getting to Iowa next weekend.”

The field did not complete a lap in the Irish Hills 250 before the caution was displayed for an incident involving the race leaders. Koch maintained his position and restarted 13th when the field returned to green on Lap 5. As Stage 1 continued, Koch reported that his No. 11 Camaro was too loose. He held on to finish the first stage in the 17th position and discussed changes with crew chief Chris Rice as they approached the first pit stop of the day.

Rice brought Koch down pit road under caution on Lap 33 for four tires, fuel and a track bar adjustment. The team’s quick work on pit road allowed Koch to gain two positions, putting him 16th for the restart on Lap 37.

After the field took the green flag to begin Stage 2, the caution flew once again before a lap could be completed. Rice asked his driver to save fuel under the lengthy caution, which was for a multi-car incident behind Koch. Koch restarted 13th when the field eventually returned to green on Lap 43.

Under the caution flag, Koch came down pit road for four fresh tires, fuel and an air pressure adjustment. He restarted 19th to begin the final stage of the event. Koch continued to report loose conditions as the run progressed. The team got another chance to adjust on the No. 11 machine when the caution was displayed with 43 laps to go. Koch came down pit road from the 17th position for tires, fuel and a track bar adjustment. He restarted in the same position with 38 laps remaining at MIS.

Koch raced his way up to 16th with 25 laps to go and maintained that position until the next caution flag flew with 14 laps to go. The team did not pit under the debris caution, putting Koch 14th for the restart with nine laps to go.

With just five laps remaining in the Irish Hills 250, the caution flag flew with Koch racing in the 17th position. The caution carried over to a green-white-checkered restart with just one lap remaining in regulation. Despite pressure on the restart, Koch maintained his position to cross the finish line 17th at MIS. 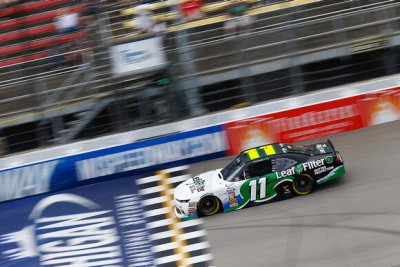