“We had some positive things come out of today, despite not taking home the finish we deserved,” said Koch. “We scored stage points in the first two stages, which is something we haven’t done yet this season and were in a great position until we got twisted up with a lapped car as the green-flag pit stops were cycling through. Our No. 11 LeafFilter Gutter Protection Chevy was mostly uninjured so that’s great news heading into Mid-Ohio next week.”

The team made significant improvements to the No. 11 LeafFilter Gutter Protection Chevrolet Camaro during Friday’s two practice sessions, eventually posting the 15th-fastest time in the final practice session. Koch noted the improvement during his qualifying run Saturday morning, securing a 14th-place starting spot for the Zippo 200.

After the drop of the green flag, Koch reported that the car was a bit loose as he settled into the 17th position. The team did not pit during the Lap 4 caution period, allowing Koch to restart 16th on Lap 7. The caution was again displayed with three laps remaining in Stage 1 as several drivers had begun to pit. Koch was scored 10th as the stage ended under caution on Lap 20, earning him one stage point to be added to his race total.

The team made their first pit stop of the day under caution on Lap 21 for fresh tires, fuel, track bar and air pressure adjustments. Koch restarted 20th on Lap 23 when Stage 2 began.

The race was slowed by caution for the third time on Lap 34 as Koch had raced his way up to the 10th position. He restarted ninth with two laps remaining in Stage 2. In the closing laps of the stage, Koch rocketed past two more cars, taking the stage flag from the seventh position and earning three stage points.

The team opted not to pit under caution to conserve track position. Koch reported that the car was handling much better as he was told to save fuel. He restarted seventh to begin the final stage of the event on Lap 43.

The team made their only green-flag pit stop of the day on Lap 51 for new tires and fuel. As stops continued to cycle through in the next two or so laps, Koch had a dust up with a lapped car, impeding his progress through the field. With no damage, Koch soldiered on and was scored 19th when the caution was displayed with five laps remaining in the race. The team pitted for the final time under that caution for fresh tires and fuel, putting Koch 24th for the restart with three laps remaining.

In the closing laps, Koch avoided chaos around him to gain two positions and cross the finish line 22nd. 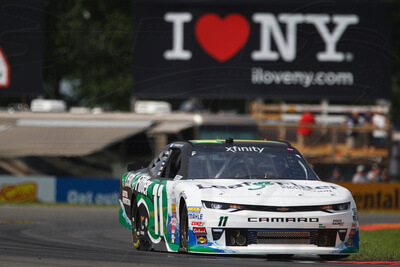