Blake Koch at Bristol Motor Speedway… Blake Koch has 12 previous starts in the NASCAR XFINITY Series (NXS) at Bristol Motor Speedway (BMS). He earned a track-best start of 16th in April of 2016 and tied that earlier this season when the NXS visited BMS in April. He earned a track-best finish of eighth in this race last year (August 2016) after starting 17th. The last time Koch visited BMS in April, he finished ninth, earning his first top-10 of the 2017 season. Koch has recorded a total of two top-10 finishes at BMS.

Sounding Off – Blake Koch… “Statistically, Bristol seems like it’s our best racetrack after finishing eighth and ninth in the last two races there. We have good notes to go off of and I really like the PJ1 substance that Bristol put down on the track last race and plan to put down again. I love short tracks and think this weekend is a good opportunity for us to secure some more points and our position in the playoffs.”

2017 Season… Koch is currently tied for ninth in the NXS Championship standings after 21 races. He has recorded one pole position, six top-10 starts, two top-10 finishes and nine top-15 finishes. The Kaulig Racing driver has led 32 laps so far in 2017. Last week at Mid-Ohio Sports Car Course, Koch scored a track-best start of third and finish of 11th after winning Stage 1, finishing 10th in Stage 2 and suffering major damage in the final stage before battling back to capture a top-15 finish. The stage win was his second of the 2017 season, earning him an additional playoff point.

Meet Blake…Koch and crew chief Chris Rice will serve as grand marshals for Thursday night’s Speedway Children’s Charities Night Race 5K presented by Bojangles at BMS. Koch will address the crowd, take photos and meet with fans at 8:15 p.m. ET before joining Chris Rice to give the command for the 8:30 p.m. ET start time. Registration is $25 with all proceeds benefitting local children through Speedway Children’s Charities.

Koch will visit the NXS XFINITY Zone presented by Comcast at BMS on Friday, August 28th at 2:30 p.m. ET for a Q&A and autographs.

Koch will meet with fans and sign autographs at the LeafFilter Gutter Protection display in the BMS FanZone on Saturday, August 18th at 5:45 p.m. ET.

Tune-In… The 300-lap Food City 300 from BMS will be televised live Friday, August 18th, 2017 at 7:30 p.m. ET on NBCSN and will be broadcasted live on the Performance Racing Network (PRN) and SiriusXM NASCAR Radio channel 90. 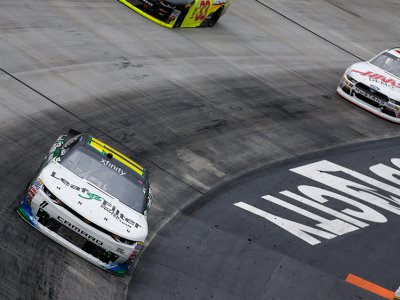