www.leaffilter.com
NEWTON, Iowa. (July 30, 2017) – Kaulig Racing driver Blake Koch tied his career-best NASCAR XFINITY Series (NXS) finish of eighth on Saturday at Iowa Speedway, which also was a track-best finish for the driver of the No. 11 LeafFilter Gutter Protection Chevy Camaro. Koch started seventh in the US Cellular 250 on his way to score his second top-10 finish of the 2017 season and advance to 10th in the NXS Championship standings.

“It was awesome to have such a great weekend at one of my favorite tracks, said Koch.” “We unloaded with speed on Friday, which really gave us confidence for the rest of the weekend. I can’t thank my team enough for their hard word and for preparing such a fast LeafFilter Gutter Protection Chevy for this weekend. We look forward to carrying this momentum to Watkins Glen next week.”

Koch posted the 15th- and fifth-fastest practice speeds, respectively, in Friday’s two practice sessions at Iowa Speedway. The team was pleased with the speed and handling of the No. 11 Camaro and made few changes before Saturday morning’s group qualifying session.

Koch advanced to the final round of group qualifying before eventually securing a seventh-place starting position for Saturday afternoon’s event, his best at Iowa Speedway.
After the drop of the green flag, Koch had settled into the 10th position by Lap 25 and was quiet on the radio. He reported later in the run that his forward drive was good, but he needed to be freed up on center and exit. He crossed the finish line for Stage 1 in the 10th position on Lap 60, earning one bonus point for his race total.
Under the caution, crew chief Chris Rice brought Koch down pit road for four fresh tires, fuel and an air pressure adjustment. The West Palm Beach, Fla. native restarted 12th when the field returned to green to begin Stage 2 on Lap 67.
A quick caution flag on Lap 73 gave Koch time to tell the team he started off a little free in that run, but that the balance was coming to him. He restarted 11th on Lap 78.
When Stage 2 ended on Lap 120, Koch crossed the line in the 14th position. He reported to the team that the track conditions seemed to be changing as more rubber was laid down and that he needed more forward drive. He came down pit road for four tires, fuel and an air pressure adjustment under the caution period for the end of Stage 2 before restarting 14th when Stage 3 began on Lap 128.
A nearly 50-lap green-flag run came to an end on Lap 170 when the caution was displayed. Koch, who was running 14th, told the team he thought he was overdriving his entry into Turn 3. Rice brought Koch down pit road under the caution period for four tires, fuel and an air pressure adjustment. He restarted 12th on Lap 177, conscious of his drive into Turn 3.
Koch continued to work on his line around the track for the middle part of Stage 3 as he ran 13th. With 25 laps remaining in the event, the field fell under the first of four caution flags in the final laps of the race. The originally scheduled 250-lap event was extended by a green-white-checkered finish to Lap 253. On the final restart, Koch powered from the 12th position all the way up to eighth to record a track-best finish at Iowa Speedway and his second top-10 finish of the 2017 NXS season.
Koch and the No. 11 LeafFilter Gutter Protection team leave Iowa Speedway 10th in the NXS championship standings, a gain in one position over last week. The team returns to racing action Saturday, August 5th, 2017 at Watkins Glen International. 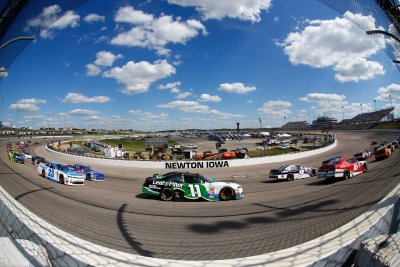