After qualifying 18th, the No. 44 Zachry team had to make an ignition switch change which forced the team to start from the rear of the field. Early into the race, Starr was making his way through the field and on lap 40 brought his Camry to pit road for right side tires and fuel. Running in the 21st position at the halfway point, Starr was continuing to work his way through the field. When the caution came out at lap 79, Starr came to pit road for four sticker tires, fuel and a windshield tear off. Late into the race, Starr came on the radio and reported that the car was great. The No. 44 Camry received minor nose damage in a wreck, but the team came down to pit road to repair the nose. The team was able to make adjustments to Starr’s Camry and got him back out on track to finish the race 6th.

Driver QUOTE: “I cannot thank Zachry enough for coming on board the No. 44 Camry this season. I am very pleased with the outcome of today’s race and can’t thank my crew guys enough for their hard work. Going to Atlanta next week, I am really excited for the 2015 season.

During qualifying, the No. 8 LeafFilter Gutter Protection Camry was involved in an on track wreck that sent the team to unload the backup car. After making it to pit road with minutes to spare before the green flag dropped, Koch was ready to strap in and go racing. Early into his first run, Koch was running in the 39th position. After pitting for fuel only and a big trackbar adjustment, Koch was gaining positions. Finding himself in the 20th position, Koch held that position and posted a 20th place finish.

Driver QUOTE: “The No. 8 LeafFilter Gutter Protection Camry team overcame adversity today. After wrecking in qualifying and unloading the backup car, someone from every team at TriStar Motorsports helped get my car ready to take the green flag. I can’t thank my crew enough for their hard-work and I am very happy to have gotten a 20th place finish out of today.”

In his first race at Daytona International Speedway, Cale Conley took the green flag from the 17th position. A long green flag run saw Conley hold steady in 28th. When the first caution flag waved at lap 78, Conley had to serve a pass through penalty for crew members being over the wall to soon. After making it through the first big wreck of the day, when the second wreck happened Conley drove into the grass and made contact with the No. 9 car. After being checked and released from the infield care center, Conley finished the race in the 30th position.

Conley was the second-highest finishing rookie and sits (unofficially) 22nd in the Driver’s Championship Points.

Driver QUOTE: “Not the finish we’d hoped for. We had a good run going and I was hoping to get in position for the Luck Dog near the end of the race. I turned into the grass to avoid the wreck, but wound up making contact with the 9 and getting the car stuck in a storm drain, forcing us to take it to the garage. I feel like I gained a lot of experience and I’ll build upon it at Atlanta.”

After finishing final NASCAR XFINITY Series practice 9th, Scott Lagasse and the Alert Today Florida / Boy Scouts America team had high hopes for their Toyota Racing Camry. In a wreck filled, rain filled, Coors Light Pole Qualifying Session, Lagasse was in the third qualifying group and followed in line for three laps to log a time consistent with 25th start spot. When qualifying was over, Lagasse was marked to start 37th until the final ruling of the group two wreck, which knocked the 33-year-old driver out of the starting line-up. Trading numbers with teammate, Jeff Green, Lagasse and crew “thrashed” to prepare the No. 10 for the green flag. Starting from the 22nd spot, the No. 10 Alert Today Florida / Boy Scouts of America Camry settled in to the 25th position where it stayed until the team’s first green flag pit stop on lap 40. The events first caution fell on lap 82 and it was just what the team was looking for because one lap before, Lagasse had no fuel pressure and was going to have to pit under green for fuel. With a full tank of fuel, Lagasse restarted 28th to only be caught up in a wreck on lap 94 and was relegated to a 37th place finish.

Driver QUOTE: “It was not the day we were looking for, but I’d like to thank the guys at TriStar Motorsports for their hard work. I would also like to thank Alert Today Florida and the Boy Scouts of America for all of their support this weekend. What a wild race!”

This article was originally published by TriStar Motorsports and can be found here. 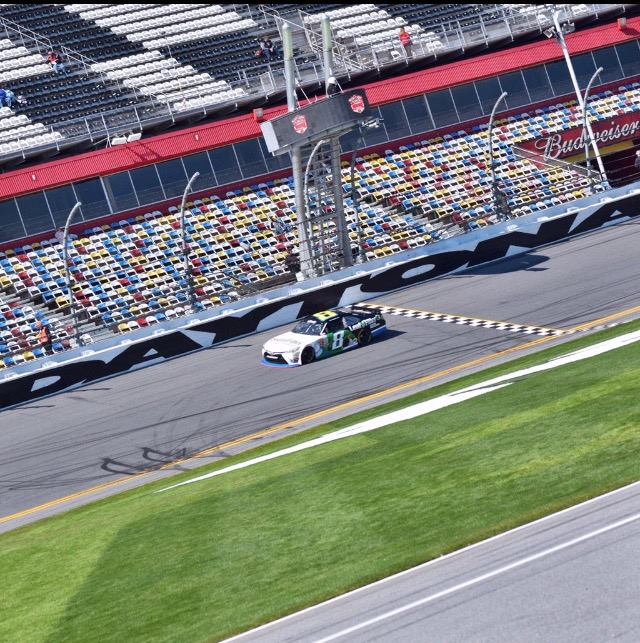