David Starr and the No. 44 Zachry Camry qualified 18th for Saturday’s race at Talladega Superspeedway. Starr was running in the 20th position when the first caution flag waved at lap two and by the time for the first round of green flag pit stops came around, Starr was scored in the 32nd position. The No. 44 Zachry pit crew serviced the No. 44 Camry on lap 36 for right side tires and fuel. Running 17th on lap 67, a late race caution flag waved which turned into a red flag. As cars were stopped on the backstretch under red flag conditions, the No. 44 team discussed fuel strategy. Once the green flag was waved, Starr took the lead on lap 81. The No. 44 Zachry Camry ran in the lead position for five laps, with his teammate Cale Conley right behind him. David Starr and the No. 44 Zachry Camry finished the Winn-Dixie 300 in the 14th position.

Driver QUOTE: “Our Zachry Toyota Camry was awesome today. Greg Conner and the entire Zachry team did a heck of a job. I was trying to be conservative and I can’t thank my teammate Mike Bliss enough. He fell back and helped us out. There was a lot of TriStar collaboration going on between our teams. We gave it all we had today. My Zachry Camry was good today. We lead there for a couple laps and we can leave here with our head held high. The momentum was good, but dang it would have been good to get a win. It is not a bad run for us, compared to how we ran last week. We will take this and move on to Iowa in two weeks.”

Blake Koch qualified 24th for the Winn-Dixie 300 and was ready to get the second superspeedway race of 2015 underway. When an early caution came out on lap two, Koch had already advanced 12 positions and was scored in 12th. Running 10th on lap nine, Koch radioed in and reported that his Camry was loose in turn three. When the first round of green flag pit stops started around lap 35, Koch brought his Camry to pit road for right side tires, fuel and a track bar adjustment. Running 25th on lap 64, Koch was quiet on the radio. When caution came out around lap 73, Koch reported that the previous adjustments the team made helped the handling of the car, but he could use just a few more adjustments. The No. 8 LeafFilter Gutter Protection Camry was involved in a wreck with 16 laps to go, which left the right side damaged. After three trips to pit road for repair, Koch radioed in and said “I will just hold on these last eight laps.” Koch and the No. 8 LeafFilter Gutter Protection Camry brought home a 23rd place finish.

Driver QUOTE: “The No. 8 LeafFilter Camry was great today. We ran in the top-15 for a while and unfortunately got caught up in a wreck, which left the right side damaged. My team repaired the car the best they could, but with eight laps to go I just held on. I can’t thank my team, pit crew, TriStar Motorsports and LeafFilter Gutter Protection enough for a great race in Talladega.”

The Winn Dixie 300 was a roller coaster for Talladega newcomer, Cale Conley. Conley started the 300-mile race from the 26th position. The rookie broke into the top-15 quickly, where he remained until mid race. As the leaders approached the lap-down cars, the field went four-wide and Conley was shuffled to the tail end of the pack. “The Big One” happened soon thereafter and Conley was able to maneuver through the incident unscathed. Conley restarted in the seventh position and began to work his way through the field. Another caution flag flew for a multi-car incident, setting Conley up to restart from the front row as the laps were winding down. Unfortunately, Conley was pushed out of line by a competitor, which sent him spinning across the super stretch and making contact with the wall. The IAVA crew made swift work of repairs and Conley was able to salvage a 23rd-place finish.

Driver QUOTE: “What a disappointing finish to what was shaping up to be our best of the season. The car handled well today and it was great getting to restart on the front row and run inside the top 10. I just got hit hard from the back, too hard to stay in the pack. But I’m proud of my team enjoyed my first time racing at Talladega.”

Starting from the 23rd position, Mike Bliss and the no.19 Steely Lumber team were ready to charge in the Winn-Dixie 300 at Talladega Superspeedway. The 2.666-mile tri-oval was Bliss’ first Superspeedway of the 2015 XFINITY Series season. As the field began to roll and settle in luck was not on Bliss’ side. As the pack tried to complete lap two of the 122-lap event, Bliss was hit from behind and sent spinning on to the apron. The Toyota Camry only lead on that all four Goodyear racing tires had been flat spotted, until Bliss tried to pull away. Acknowledging the track bar was broken in half, Bliss had to limp the no. 19 to the garage. Fixing the track bar and a rear shock, Bliss returned to the track 13 laps down marked in the 39th position. With nothing to lose Bliss would tandem draft, with the pack in sight. Staying out of trouble Bliss held on to finish 34th.

Driver QUOTE: “Well that was not what we were looking for. We really had a shot and fell short to bad luck. My guys worked really hard to get me back out after our wreck without losing too many laps.” 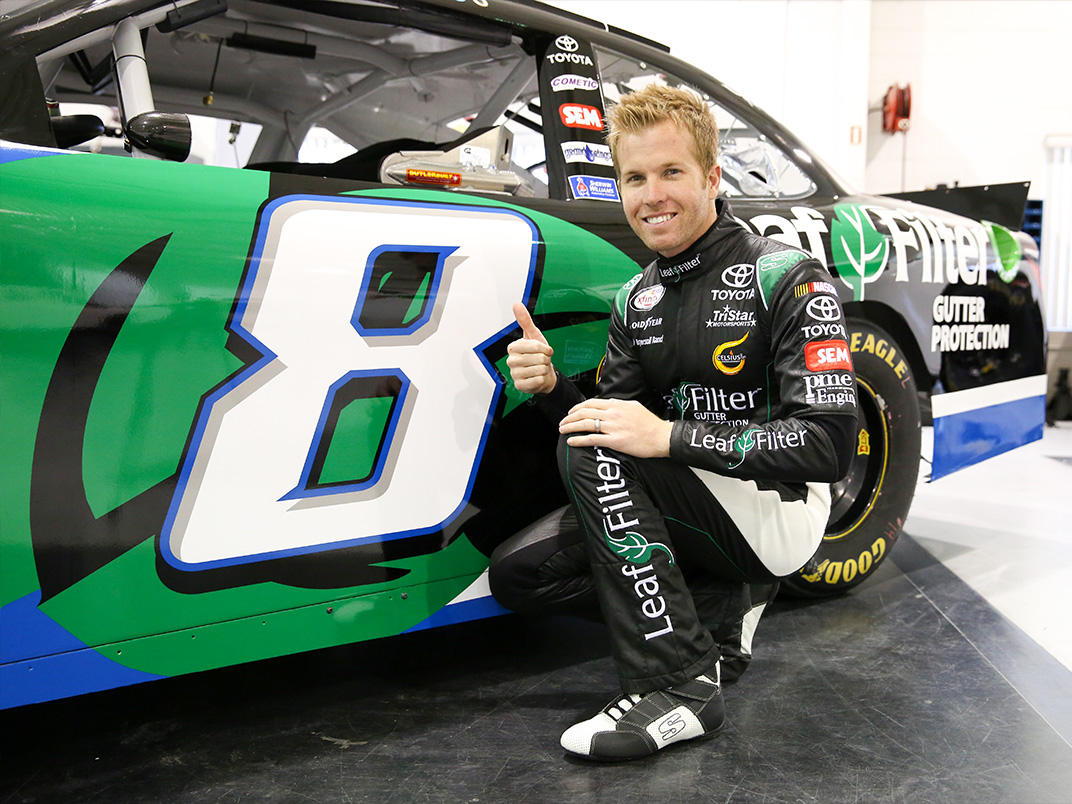